Crooks have stolen tens of millions of dollars and other valuable commodities from thousands of consumers via “SIM swapping,” a particularly invasive form of fraud that involves tricking a target’s mobile carrier into transferring someone’s wireless service to a device they control. But the U.S. Federal Communications Commission (FCC), the entity responsible for overseeing wireless industry practices, has so far remained largely silent on the matter. Now, a cadre of lawmakers is demanding to know what, if anything, the agency might be doing to track and combat SIM swapping. 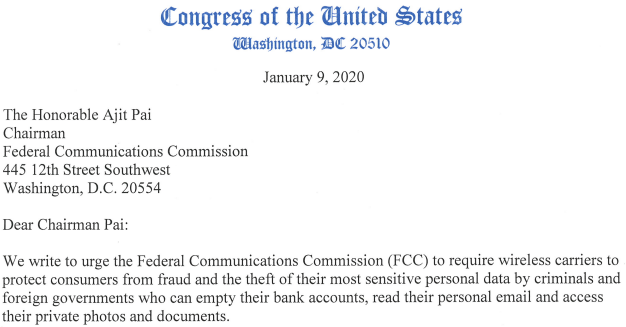 On Thursday, a half-dozen Democrats in the House and Senate sent a letter to FCC Chairman Ajit Pai, asking the agency to require the carriers to offer more protections for consumers against unauthorized SIM swaps.

“Consumers have no choice but to rely on phone companies to protect them against SIM swaps — and they need to be able to count on the FCC to hold mobile carriers accountable when they fail to secure their systems and thus harm consumers,” reads the letter, signed by Sens. Ron Wyden (OR), Sherrod Brown (OH) and Edward Markey (MA), and Reps. Ted Lieu (CA), Anna Eshoo (CA) and Yvette Clarke (NY).

SIM swapping is an insidious form of mobile phone fraud that is often used to steal large amounts of cryptocurrencies and other items of value from victims. All too frequently, the scam involves bribing or tricking employees at mobile phone stores into seizing control of the target’s phone number and diverting all texts and phone calls to the attacker’s mobile device.

Once in control of the stolen phone number, the attacker can then reset the password for any online account that allows password resets and/or two-factor verification requests via text messages or automated phone calls (i.e. most online services, including many of the mobile carrier Web sites).

From there, the scammers can pivot in a variety of directions, including: Plundering the victim’s financial accounts; hacking their identities on social media platforms;  viewing the victim’s email and call history; and abusing that access to harass and scam their friends and family.

The lawmakers asked the FCC to divulge whether it tracks consumer complaints about fraudulent SIM swapping and number “port-outs,” which involve moving the victim’s phone number to another carrier. The legislators demanded to know whether the commission offers any guidance for consumers or carriers on this important issue, and if the FCC has initiated any investigations or taken enforcement actions against carriers that failed to secure customer accounts.

The letter also requires the FCC to respond as to whether there is anything in federal regulations that prevents mobile carriers from sharing with banks information about the most recent SIM swap date of a customer as a way to flag potentially suspicious login attempts — a method already used by financial institutions in other countries, including Australia, the United Kingdom and several nations in Africa.

“Some carriers, both in the U.S. and abroad, have adopted policies that better protect consumers from SIM swaps, such as allowing customers to add optional security protections to their account that prevent SIM swaps unless the customer visits a store and shows ID,” the letter continues. “Unfortunately, implementation of these additional security measures by wireless carriers in the U.S. is still spotty and consumers are not likely to find out about the availability of these obscure, optional security features until it is too late.”

The FCC did not immediately respond to requests for comment.

Legitimate SIM swaps are a common request for all carriers, and they usually happen when a customer has lost their mobile phone or when they need to upgrade to a newer model that requires a different-sized SIM card (the small, removable smart chip that ties the customer’s device to their phone number).

But unauthorized SIM swaps enable even low-skilled thieves to quickly turn a victim’s life upside down and wrest control over a great deal of their online identities and finances. What’s more, the security options available to wireless customers concerned about SIM swapping — such as personal identification number (PIN) codes — are largely ineffective against crooked or clueless mobile phone store employees.

A successful SIM swap may allow tormentors to access a victim’s email inbox even after the target has changed his or her password. For example, some email services allow customers to reset their passwords just by providing a piece of information that would likely only be known to the legitimate account holder, such as the month and year the account was created, or the name of a custom folder or label in the account previously created by the user.

One technique used by SIM swappers to regain access to hacked inboxes is to jot down this information once a SIM swap affords them the ability to reset the account’s password. Alternatively, SIM swappers have been known to create their own folders or labels in the hacked account to facilitate backdoor access later on.

A number of young men have recently been criminally charged with using SIM swapping to steal accounts and cryptocurrencies like Bitcoin from victims. This week, a court in New York unsealed a grand jury indictment against 22-year-old alleged serial SIM swapper Nicholas Truglia, who stands accused of using the technique to siphon $24 million worth of cryptocurrencies from blockchain investor Michael Terpin.

But experts say the few arrests that have been made in conjunction with SIM swapping attacks have pushed many involved in this crime to enlist help from co-conspirators who are minors and thus largely outside the reach of federal prosecutors.

For his part, Terpin sent an open letter to FCC commissioners in October 2019, urging them to mandate that wireless carriers provide a way for customers to truly lock down their accounts against SIM swapping, even if that means requiring an in-person visit to a store or conversation with the carrier’s fraud department.

In an interview with KrebsOnSecurity, Terpin said the FCC has so far abdicated its responsibility over the carriers on this matter.

“It took them a long time to get around to taking robocalls seriously, but those scams rarely cost people millions of dollars,” Terpin said. “Imagine going into a bank and you don’t remember your PIN and the teller says, ‘Oh, that’s okay I can look it up for you.’ The fact that a $9-an-hour mobile store employee can see your high security password or PIN is shocking.”

“The carriers should also have to inform every single current and future customer that there is this high security option available,” Terpin continued. “That would stop a lot of this fraud and would take away the ability of these ne’er-do-well 19-year-old store employees who get bribed into helping out with the scam.”

Want to read more about SIM swapping? Check out Busting SIM Swappers and SIM Swap Myths, or view the entire catalog of stories on the topic here.

This entry was posted on Thursday, January 9th, 2020 at 2:44 pm and is filed under SIM Swapping. You can follow any comments to this entry through the RSS 2.0 feed. You can skip to the end and leave a comment. Pinging is currently not allowed.