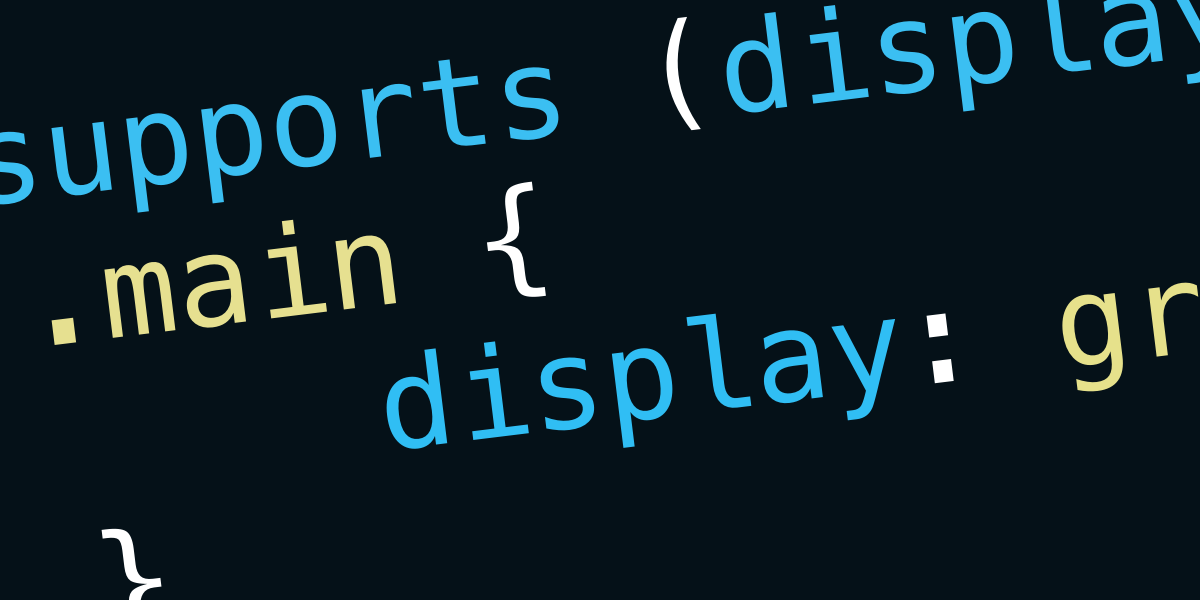 CSS has a neat feature that allows us to test if the browser supports a particular property or property:value combination before applying a block of styles — like how a @media query matches when, say, the width of the browser window is narrower than some specified size and then the CSS within it takes effect. In the same spirit, the CSS inside this feature will take effect when the property:value pair being tested is supported in the current browser. That feature is called @supports and it looks like this:

Why? Well, that’s a bit tricky. Personally, I find don’t need it all that regularly. CSS has natural fallback mechanisms such that if the browser doesn’t understand a property:value combination, then it will ignore it and use something declared before it if there is anything, thanks to the cascade. Sometimes that can be used to deal with fallbacks and the end result is a bit less verbose. I’m certainly not a it’s-gotta-be-the-same-in-every-browser kinda guy, but I’m also not a write-elaborate-fallbacks-to-get-close kinda guy either. I generally prefer a situation where a natural failure of a property:value doesn’t do anything drastic to destroy functionality.

That said, @supports certainly has use cases! And as I found out while putting this post together, plenty of people use it for plenty of interesting situations.

A classic use case

The example I used in the intro is a classic one that you’ll see used in lots of writing about this topic. Here it is a bit more fleshed out:

Nice grid! Repeating and auto-filling columns is a sweet feature of CSS grid. But, of course, there are browsers that don’t support grid, or don’t support all the specific features of it that I’m using above there.

For example, iOS shipped support for CSS grid in version 10.2, but iOS has had flexbox support since version 7. That’s a decent gap of people with older iOS devices that do support flexbox but not grid. I’m sure there are more example gaps like that, but you probably get the idea.

It may be acceptable to let the fallback for this be nothing, depending on the requirements. For example, vertically stacked block-level elements rather than a multi-column grid layout. That’s often fine with me. But let’s say it’s not fine, like a photo gallery or something that absolutely needs to have some basic grid-like structure. In that case, starting with flexbox as the default and using @supports to apply grid features where they’re supported may work better…

The “fallback” is the code outside of the @supports block (the properties above the block in the example above), and the grid code is either inside or after. The @supports block doesn’t change any specificity, so we need the source order to help make sure the overrides work.

Notice I had to reset the margin on the divs inside the @supports block. That’s the kind of thing I find a bit annoying. There is just enough crossover between the two scenarios that it requires being super aware of how they impact each other.

There is “not” logic in @supports blocks, but that doesn’t mean it should always be used

Jen Simmons put this example in an article called Using Feature Queries in CSS a few years ago:

Notice the not operator in the first block. That’s checking for browsers that do not support grid in order to apply certain styles to those browsers. The reason this approach is considered bad practice is that the browser support for @supports itself has to be considered!. That’s what makes this so dang tricky.

It’s very appealing to write code in logically separated @supports blocks like that because then it’s starting from scratch each time and doesn’t need to be overriding previous values and dealing with those logical mind-benders. But let’s go back to the same iOS situation we considered before… @supports shipped in iOS in version 9 (right between when flexbox shipped in iOS 7 and grid shipped in iOS 10.2). That means any flexbox fallback code in a @supports block using the not operator to check for (display: grid) {} support wouldn’t work in either iOS 7 or 8, meaning the fallback now needs a fallback from working in browsers it otherwise would have. Phew!

The big reason to reach for @supports is to account for very different implementations of something depending on feature support where it becomes easier to reason and distinguish between those implementations if the blocks of code are separated.

We’ll probably get to a point where we can use mutually-exclusive blocks like that without worry. Speaking of which…

@supports is likely to be more useful over time.

Once @supports is supported in all browsers you need to support, then it’s good to start using it more aggressively and without having to factor in the complication of considering whether @supports itself is supported. Here’s the support grid on that:

Basically, IE 11 and any iOS device stuck on iOS 8 are the pain points. If your requirements are already past those, then you’re good to use @supports more freely.

The irony is that there hasn’t been a ton of CSS features shipping that have big clear @supports use cases — but there are some! Apparently, it’s possible to test new fancy stuff like Houdini:

Using it on my wedding website to check for Houdini support 🎩🐰

(I’m not sure entirely what you’d put in the @supports block to do that. Has anyone else done this?)

When @supports isn’t doing anything useful

I’ve seen a good amount of @supports uses in the wild where the end result is exactly as it would be without using it. For example…

On some level, that makes perfect logical sense. If transforms are supported, use them. But it’s unnecessary if nothing different is happening in a non-support scenario. In this case, the transform can fail without the @supports block and the result is the same.

Here’s another example of that shaking out.

There are browser extensions for playing with @supports

There are two of them!

They are both centered around the idea that we can write @supports blocks in CSS and then toggle them on and off as if we’re looking at a rendering of the code in a browser that does or doesn’t support that feature.

Here’s a video of Keith’s tool applied to the scenario using grid with a flexbox fallback:

Ire’s tool, which she wrote about in the article Creating The Feature Queries Manager DevTools Extension, has a slightly different approach in that it shows the feature queries that you actually wrote in your CSS and provides toggles to flip them on and off. I don’t think it works through iframes though, so I popped open Debug Mode to use it on CodePen.

Here’s one from Erik Vorhes. He’s styling some custom checkboxes and radio buttons here, but wraps all of it in a @supports block. None of the styling gets applied unless the block passes the support check.

Here’s a bonus one from Nick Colley that’s not @supports, but @media instead! The spirit is the same. It can prevent that “stuck” hover state on touch devices like this:

JavaScript has an API for this. To test if it exists…

To use it, either pass the property to it in one param and the value in another:

…or give it all in one string mirroring the CSS syntax:

At the time of this writing, only Firefox supports this sort of testing (behind an experimental flag), but there is a way to test the support of selectors with @supports. MDN’s demo:

Of course, we’d love to see Pens of @supports use cases in the comments. So share ’em!